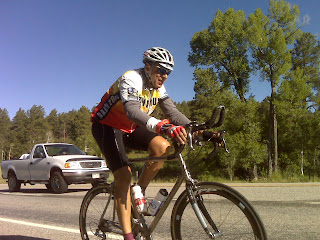 Paul has crossed into the 4th state on this year's RAAM course and he is determined to not stop until he reaches Taos New Mexico, which will likely be early Saturday morning. He has been passed by a RAW team and cranked up the pace as they approached to fight them off because he has been the front runner on the course thus far. At the TS#16 in Chama, NM, though Jure Robic and Dani Wyss are only 2 hours behind Paul and will likely catch him before the end of the day Saturday.
Posted by Paul Danhaus at 11:19 PM

Way to go! Everyone at Cronometro is cheering for you!

Keep it going Paul. You are doing great.